Discussed below is a brief outline, review and history of the Volvo P1800 nameplate.  This includes development, production, history, market impact and legacy. At the bottom of this page you will find basic features and specifications.

P1800: A Classic Sports Car Made By Volvo – Ads From Craigslist
The P1800 Volvo sports car is a popular car for sale on Craigslist Classifieds. Both the Coupe and Sports Estate version can be found however the P1800 is somewhat rare due to the fact that less than 50K were built during the production from 1961 to 1973. The P1800 is also known in pop culture for appearing in the TV series The Saint starring Roger Moore. The Volvo P1800 is also in the record books as the car with the most driven miles. This was done by a man named Irv Gordon who has owned the same 1966 1800S for more than 46 years and put over 3 million miles on it.

The original P1800 was produced by Jensen motors and featured the B18 engine. However by 1963 after issues with quality production moved to Volvo’s Lundy plant where the designation was changed to the 1800S with some performance improvements. 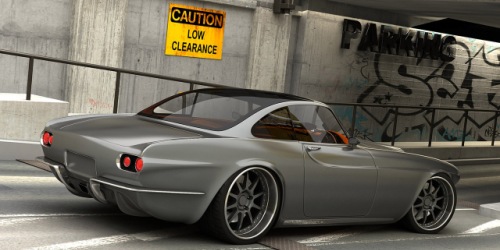 By 1970 many changes led to a fuel-injected 1800E. A new top speed of 120 mph and four wheel disc brakes were among the boosts. The ES introduced a station wagon with an all-glass tailgate, a feature that would become very popular with Volvo designers in the future.

The P1800 project was started in 1957 after a previously failed attempt with the P1900. After developing the P958-X1, P958-X2 and P958-X3 prototypes in 1958, the project ran into problems with funding and production. The P1800 was reenergized however when press photos surfaced forcing Volvo to acknowledge the existence of the car. The press led to public demand and in 1960 production began on the first Volvo P1800.

Outlined below are the basic features and specifications for the Volvo P1800.

Let us know what you think in the comments below…