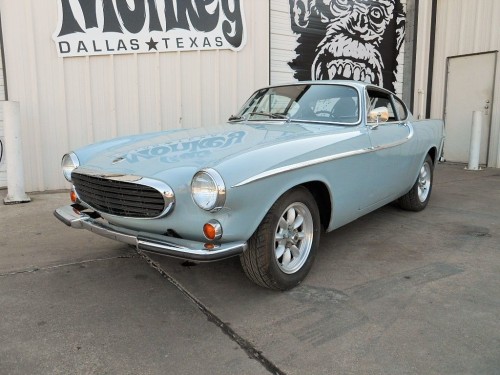 1966 Volvo P1800S in very good condition showing 13,773 miles (unable to confirm, so listed as 113,773) offered by Gas Monkey Garage. The P1800 project was started in 1957 because Volvo wanted a sports car. The man behind the project was an engineering consultant to Volvo, Helmer Petterson, who in the 1940s was responsible for the Volvo PV444.The car was presented to the public for the first time at the Brussels Motor Show in January 1960.A white 1962 Volvo P1800 driven by Simon Templar, played by Roger Moore, was featured in the TV series The Saint beginning in 1962 and played a prominent role throughout the entire run of the show. Roger Moore was so smitten with the Volvo P1800 that he bought one for his own personal use. When asked to name his favorite “movie cars”, Moore stated it was the Volvo P1800, commenting: “I have a great affection for the Volvo P1800, as, of course, I owned one, as well as used one in the series. It’s a beautiful car and I still drive a Volvo to this day.” A 1966 Volvo 1800S and its owner Irv Gordon of East Patchogue, New York, USA own the Guinness world record for highest mileage in the same vehicle he has been driving since 1966, He has driven about 26,000 of those miles outside of the U.S., in Canada and Mexico, as well as in Europe. “In Sweden, we drove to Volvo’s global headquarters to see where the P1800 was born”, Gordon said the car surpassed the 3 million mile mark in Alaska in September 2013. I found this really well preserved example of the Iconic Swedish Sports Car in a private collection in California where it has been stored for quite some time and not driven in over 10 years! This 1966 Volvo P 1800 S has been maintained by an enthusiastic owner who enjoyed driving it as long as he could and took pride in ownership by installing a good looking set of modern Minilite replica alloy wheels and radial tires along with a set of Bilstien gas pressure shocks to improve the ride and handling of this iconic nearly 50 year old classic. The exterior is in remarkably good condition with all trim present and showing minor tarnishing and pitting as you would expect from such an iconic sports car that has been enjoyed as it should have been. The paint is in good condition as well having been re-sprayed at some point in the past and shows well with a glossy finish that has a few nicks and scratches, again from being enjoyed on the open road for years (see all pics) The interior is also in very good original condition with minor wear present and is mostly complete making for an easy restoration if you choose to pursue a museum quality Volvo P1800 S. The engine had not been started in over 10 years, so I got Aaron and the guys to take a look at it. The fuel system was drained and we found out the fuel tank was not in the best shape from being stored for all those years with bad fuel in it. So we chose to replace it with a brand new tank, fuel pump and lines. The engine fired to life once again and runs quite well with a smooth idle and quiet acceleration.Underside pics reveal a solid chassis and suspension presence with minimal superficial rust present (again, see all pics). While this car runs and drives, it should be completely serviced before any extended driving is performed to ensure safety and reliability (due to our filming schedule, we’re unable to perform any additional work on this Volvo- SOLD AS IS/WHERE IS).If you’re looking for a good example of the iconic Swedish sports car, don’t miss a rare opportunity to own this one as you won’t find a better example that’s priced to sell! Suitable for a Museum Quality restoration project, Advertising and Promotional use, personal collection or driver duty. This awesome 1966 Volvo P1800S will be seen on an upcoming episode of the hit show “Fast N Loud” and the winning bidder may have the option of taking deliver at the shop here in Dallas Texas! We sell internationally as well as locally and will end the Auction when it sells. LOW FEEDBACK BIDDERS WITH LESS THAN 5, PLEASE SEND YOUR PHONE # & EMAIL TO “ask seller a question” BEFORE YOU BID. See all pics & ask any questions. And as always, all of our T-Shirts, Hoodies, Hats and Stickers are available on our website. A $1,000.00 non-refundable deposit through PayPal is required within 24 hours of auction close with the balance paid within 7 days by check, cash or bank wire only!

Pictured below are more photos of this P1800S For Sale


Ad Display Disclaimer: Some of the ads are displayed here as aggregated from other classifieds sites such as Craigslist and eBay. P1800ForSale.com is not directly involved in the sale of any vehicle, part or accessory. Please contact us for more information.